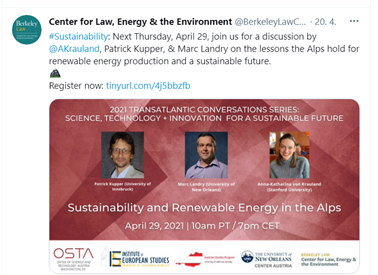 The Alps are also called the battery of Europe. They offer many ways of renewable energy, mostly in the form of hydropower. This was also used in the past in the form of mills. Very interesting part of Alps is located in Switzerland, near the borders with Italy and Austria. This part was declared the first national park in Europe, mostly because of clear-cut which destroyed most of its forests. On this example, we can truly see how nature can recover itself.

After the potential of Alpine renewable energy sources has been discovered, Alpine rivers started to be called white coal. This name has roots in the colour of water which falls from a big height, but also because white is the colour of cleanliness. The Alps annually make energy which could be also made by burning of 23 000 000 tons of coal.

Another very important fact is that the Alps offer many ways how to store water for creating energy. This water can be stored for example in dams or natural lakes. Another advantage is that most of the Alpine dams are located very high so there was no need to relocate the people living close to the dam during its construction. All of these facts make Alps very lucrative land for production of renewable energy.

However, we can also see some disadvantages. Hydroelectric power plants in Alps cannot produce the same amount of electricity during winter as during summer. This is caused by the fact that the water in Alps is during winter mostly frozen. Nevertheless, winter is the time of the year when the consumption of electricity is at the highest levels. Next problem is that nowadays only 0,5% of Alpine rivers are not developed. This fact causes problems for fish migrations and many others as well.

After all, we have to agree with the opinion that the cleanest kilowatt hour is that which has never been produced.